At long last, the new bowling mats have arrived. These yellow mats, kindly donated to the club by Mark Brocklebank, were held up by the blocking of the Suez Canal, when the container ship 'Ever Given' ran aground. Many thanks Mark, most appreciated.

Congratulations to the following lady players who have reached the NFWBA Competition Finals being played on 3rd and 6th September at Lymington Bowling Club:-

Jenny, Helen and Chris Dalrymple are playing in the Jubilee Triples against Waterside.

Debbie and Jenny are playing in the Cox‘s Pairs against Mavis and Sue, which means that Ringwood will be winning a Cup this year

Helen and Chris Pentelow are playing in the Cooley Goblets against Braeside.

This means that 7 out of our 10 lady league players who entered these competitions at the start of the season have made it into the finals.

Our County 4 players, Helen, Jenny, Chris Pentelow and Debbie who got through to Banister Park this year have been invited back there to compete in the Dolly Gore with teams competing from North,South,West and East Hampshire on the 17th September.

Thursday 26th August. B&DWBA Ladies' 1st Team Away versus Bournemouth Electric. The visit to Bournemouth sadly resulted in a loss in the last league match of the season. The 1st team finish in 6th place, above Pelhams C who are bottom of the table. Rinks 1 - 1. Shots 33 - 28. Points 4 - 2.

Saturday 28th August . B&DBA Triples 1st Team Away versus Southbourne.The 1st Team top the table after a fine win away at Southbourne and now lead Knyveton Gardens by 5 points, after they lost at New Milton. Rinks 1 - 3. Shots 51 - 77. Points 2 - 12.

Saturday 28th August. B&DBA Triples B Team Away versus Bounemouth Bobcats.The B team stay in third place despite a heavy defeat at Bournemouth. Rinks 2 - 0. Shots 39 - 27. Points 6 - 0.

Saturday 4th September. B&DBA Triples A Team away versus Boscombe Cliff A. 9.30am start.

Saturday 4th September. B&DBA Triples B Team at Home versus Milford on Sea C. 10.00am start. 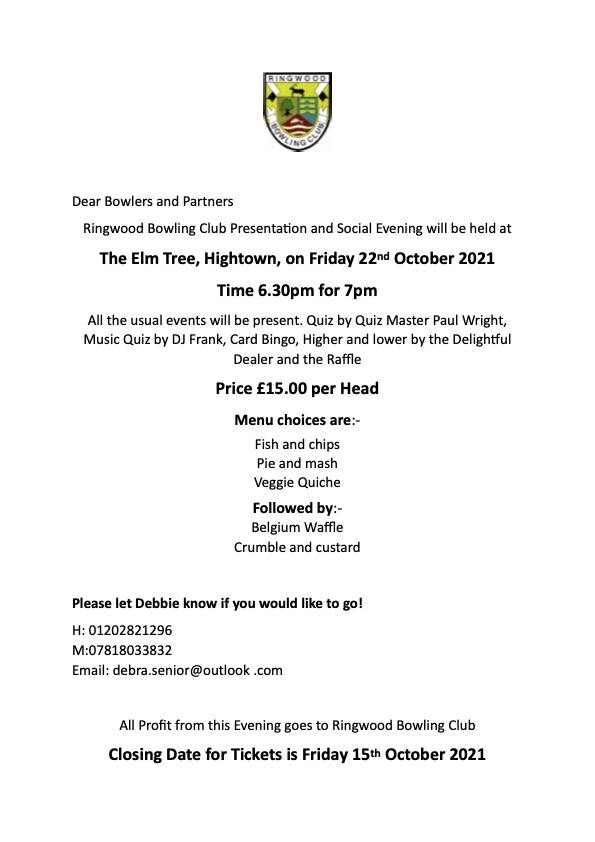 Congratulations and well done to the Men's 1st team who have won through to the final of the NFBA President's Trophy. The final takes place at Ringwood on Saturday 11th September against Braeside.

Congratulations and well done to the following who have progressed to the NFBA Competition Finals that take place at Ringwood on Sunday 5th September.

Tuesday 17th August. NFWBA Ladies' 1st Team Away versus Waterside. The 1st team finish their League campaign on a low loosing both rinks and finishing bottom of the table with 25 points. Rinks 2 - 0. Shots 42 - 27. Points 6 - 0.

Saturday 21st August. B&DBA Triples A Team Away versus Braeside A. Despite a great win in this close contest on the Braeside carpet, the A team stay third from bottom. Rinks 1 - 3. Shots 71 - 75. Points 2 - 12.

Saturday 28th August. B&DBA Triples B Team Away versus Bounemouth Bobcats. 10.00am start.

Congratulations to the ladies' teams for winning all of their league matches last week. Long may it continue.

There were two close encounters of the bowls kind on Friday:-

Also, the Bowls England Two-Fours Mid/West Hampshire Area Final versus Atherley B was keenly fought. Needing 3 on the last end to force an extra end, Pete Ward's rink could only muster 2 and sadly, our Men's 1st team also lost by just one shot.

Saturday 14th August. B&DBA Triples B Team Away versus West Moors C. A close game but unfortunately another loss and no points for the B team. However, they stay in third place. Rinks 2 - 0. Shots 43 - 37. Points 6 - 0.

Saturday 21st August. B&DBA Triples A Team Away versus Braeside A. 2.30pm start.

Saturday 21st August. B&DBA Triples B Team at Home versus Richmond Park A. 10.00am start.

There was a good turnout of club members at Ringwood Conservative Club where Alan Grant's wake was held. Members joined Alan's son Neale and other members of his family and friends to reminisce and pay tribute to Alan's life and times at RBC. All attendees raised a glass to Alan at 12.45pm when his remains were being cremated at Southhampton.

You may have noticed that hedges around the green are now nicely trimmed. A big thank you is due to all those members who turned out to do the hedge trimming, bagging up of cuttings, tidying up and disposal of the cuttings. Also, thanks also to Paul for supplying the pastries. Tasty.

Congratulations to Roger Clark who won the Harry Wright competition which concluded on Monday evening. Well done also to Fred alderman who was runner-up.

Congratulations to Pete Ward and Sharon Varndell who won there Bowls England Mixed Pairs - Area 13 - Hampshire (Mid/West) / Isle of Wight Final by 17 - 16 against Rob Crook of Littleton. Their entry into this competition was made in 2020, when Sharon was a playing member at Ringwood and was carried over to this year due to the Covid lockdown. They now play in the All-England Round of 32 @ Victoria Park, Royal Leamington Spa 9:30am & 12:30pm on Thursday 2nd September.

Congratulations to Geoff Bell, Allan Mason, Derick Faulkner and Derrick Fulker on reaching the NFBA Fours Final by defeating the Waterside team of James/Mitchell/Smith/Hawkins by 25-5 at New Milton. The Final will be played on Finals Day, Sunday 5th September, at Ringwood, against a team from either Fordingbridge or New Milton.

Thursday 5th August. NFBA Men's B Team Home & Away versus Verwood. This 1st round match in the Ringwood Shield was a close affair but sadly a loss for the B team. Rinks 1 - 3. Shots 42 - 50.

Tuesday 27th July. NFBA Men's 1st Team at Home versus Waterside. A great performance in the last game of the season results in League Champions by 1.5 points from Foringbridge. Rinks 2 - 2. Shots 79 - 57. Points 6 - 2.

Tuesday 3rd August. Hedge Trimming at the Club. 9.00am.

It is with great sadness that I have to report that Alan Grant passed away peacefully last night.

Alan was admitted to the intensive care unit at Southampton Hospital after suffering a stroke at home. Despite all efforts to save him however, sadly Alan did not pull through.

Alan's son and granddaughter will be coming to club on Tuesday evening, 27th July, during the match between Ringwood and Waterside, to meet club members.

If you would like to meet Neil and his daughter to remember and reminisce about Alan's life and times at Ringwood Bowling Club, please come along on Tuesday evening.

Our deep condolences, thoughts and best wishes go out to Neil, his family and friends. Alan will be sorely missed by our members.

I will post details of funeral arrangements when known.

Thursday 29th July. NFBA Men's A Team Away versus Milford On Sea A. 6.15pm start.