On Tuesday 12th September, Ringwood Ladies held their foutth Triples event. We have come a long way in that time. From the humble beginnings where we had to supplement our teams with the gentlemen that had turned up for a roll up in 2013 to 30 ladies all in whites and ready to play all day in 2017.

We lost to Verwood in year one. We lost to West Moors in year two but in year three Ringwood Ladies won with Sue Wyatt as skip, Debbie Senior no. 2 and Mavis Hammond as no.1. Unfortunately, year four was not to be for Ringwood either. The finalists were Highcliffe and New Milton with New Milton becoming the winning team.

Everyone joined in the spirit of the day which was competitive but fun. The general comments were what a super day it was and how nice not to be playing under the pressure of a league match. We were also very lucky with the weather. Sunshine all the way except for a slight drizzle during the semi final.

Medals were awarded for the runners up and the winners everyone else had to make do with raffle winnings, a lovely lunch, superb cakes (supplied by Mary MacArthur, Audrey Merrington, Helena Webber, Sue West and Celia Cheadle) and prize money of £12 to Margaret Whale of New Milton.

We are looking forward to another lovely Triples day in 2018.

£109 was raised for the local PDSA mostly as a result of the fabulous raffle.

Grateful thanks are due to the helpers who gave up their time to administer the scoring (Frank Senior), timing (Dave Lewis) and kitchen (Judy Lewis). The picture below was taken just before lunch. 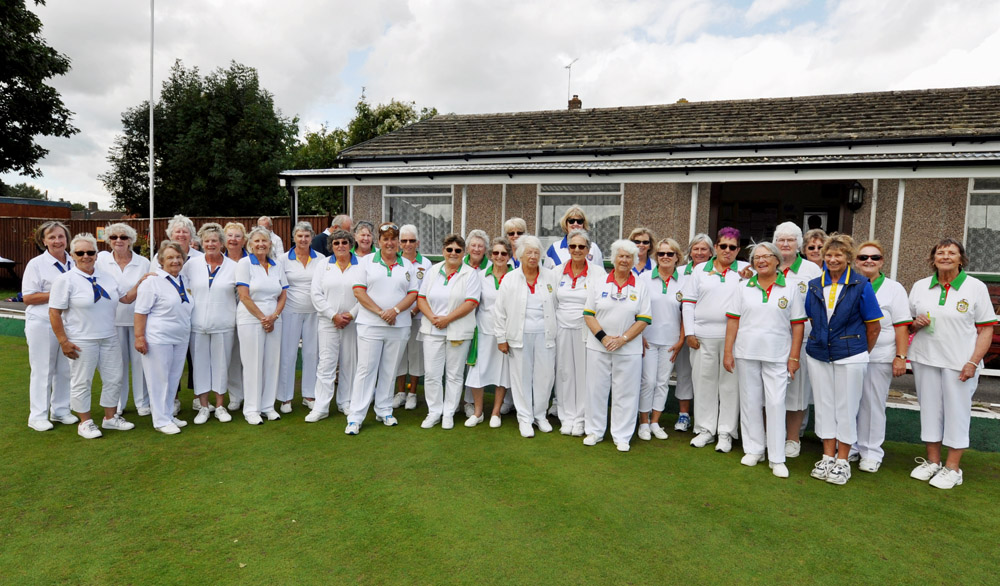 Many congratulations to the ladies of Ringwood 1 and 2 in the New Forest 'C' League. Ringwood 2 finished champions with Ringwood 1 runners-up! This is a marvellous advertisement for ladies bowlng at the Club and a fitting tribute to the dedication and hard work of the members of both teams. Well done to you all!

All the bowling ladies

What do Beyoncé, her hit All The Single Ladies and an Australian lawn bowls club have in common? Well, up until recently, absolutely nothing. But that changed when the Chadstone Bowls Club in Melbourne decided the song would be the perfect way to promote their campaign to save the venue from demolition.

In just three days, their adapted rendition and resulting video, complete with the moves that made it a favourite on dance floors across the globe almost a decade ago, has had a million views. I imagine that there would now be an international outcry if the decision is taken to bring in the bulldozers!

Click here to read the BBC news story with a link to the video and here to watch the (slightly better) Beyoncé version!

A champion for Ringwood

Many congratulations to our Ladies' Captain, Sharon Varndell, who won the Bournemouth & District Ladies Two-wood Singles Competition at Southbourne on the 21st July. She beat Pauline West of Southbourne to claim the title.

Here are some pictures. Julie Leake (formerly Saunders) is the England national Ladies Four-wood singles champion, who started her illustrious career at Ringwood!

The Ringwood Festival Plate competition on Sunday 23rd July was halted prematurely after lunch due to torrential rain and the semi-finals have been postponed to a date to be fixed. Bedraggled players had to content themselves with continuing the buffet accompanied by a soothing beer/wine!  Many thanks, by the way, to all those who donated food for the buffet - there was plenty left for Monday night!

The semi-finals will be contested by the following:

More information will be published here when available. Meanhwile, see below for pictorial dampness!

On a chilly Saturday morning in November, the Ringwood ladies gathered for a little celebration and I was happy to take some pictures to record the event.Here are a dozen (you can click each one for a larger version) and, once again, many congratulations to the ladies on their remarkable achievements in their leagues in 2016. When I left them in the clubhouse at around 10.45am, a bottle of fizz had been opened!